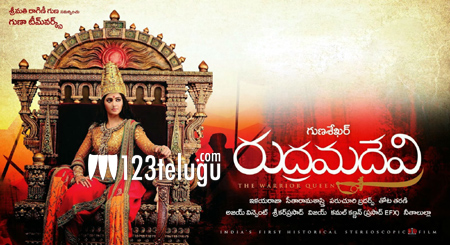 Gunasekhar’s much awaited historic 3D epic, Rudramadevi is up for release this 9th of October. The film went for censors yesterday and reports reveal that the magnum opus has come out exceptionally well and will impress the audience big time.

As the post production and CG works were taking a lot of time, the film was being postponed many a times. But now with things moving on swiftly and the film carrying positive reports, looks like there are good times ahead for both Anushka and Gunasekhar who have worked very hard for this project.

Anushka plays the central character in this film which also has Rana and Allu Arjun in important characters. Gunasekhar produces this film on his Guna Team Works banner. Ilayaraja has given the music score.