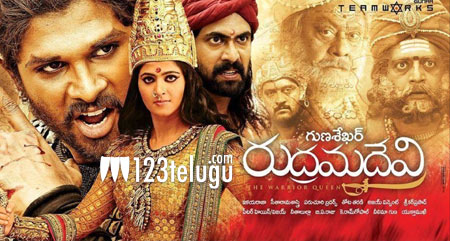 With just a week left for the film’s grand release, the makers of Rudramadevi unveiled the theatrical trailer of the film’s Hindi version yesterday to a rousing response. The trailer, much different from the Telugu trailer which was released several months ago, looks grand and effective in all means and it surely raised the expectation levels among fans.

Rudramadevi is eyeing a massive release in Telugu, Tamil, Malayalam and Hindi this 9th, and producer-director Gunasekhar is leaving no stone unturned to make the film a memorable experience for film lovers. Touted to be India’s first historic 3D film, Rudramadevi explores the legend of Kakatiya warrior queen, Rudramadevi, played by Anushka.