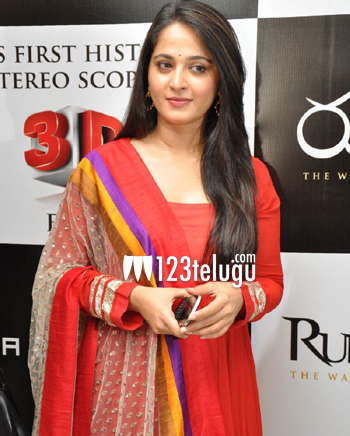 The 3D trailer of the much awaited historic drama, ‘Rudramadevi’, was premiered last night to select invitees to an instant applause. The viewers appreciated the film’s team and especially the leading lady Anushka, who impressed everyone as the warrior queen.

However, Anushka in turn heaped praises on the film’s director and producer Gunasekhar. Anushka said that ‘Rudramadevi’ is the result of the director’s hard work and passion for the past few years. Anushka also said that she was totally mesmerized by Gunasekhar’s script and that she is extremely thrilled to be a part of the 3D filmmaking process.

Anushka further added that the film’s entire cast and crew had chipped in with their best during the making process and ensured that the film looks grand on screen.