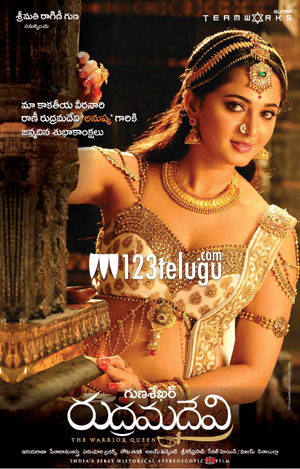 ‘Rudramadevi’, one of the most awaited films of the season, has been in the making for almost two years. The film is touted to be the first historical stereographic 3D film in India and features several internationally acclaimed technicians, apart from a range of stars like Anushka, Rana, Allu Arjun, Prakash Raj etc in key roles.

As per the latest reports, the satellite rights of this film are said to be sold for a whopping price to a leading television channel. An official conformation is yet to be received from the makers.

The film’s first look stills featuring Anushka, Rana and Allu Arjun in their respective roles have caught everyone’s attention and the fans are eagerly awaiting the film’s trailer and audio release. ‘Rudramadevi’ is expected to release in April and the team is fast finishing the post-production formalities, to bring the film out as early as possible.