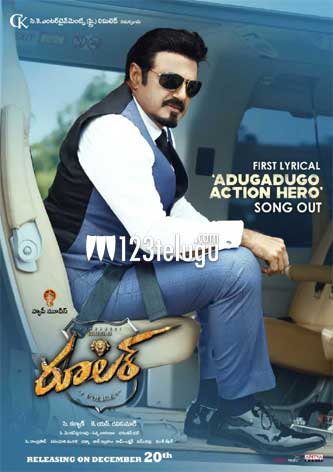 The much-awaited first single ‘Adugadugo Action Hero’ from Balakrishna’s upcoming action entertainer, Ruler, was launched today. The fast-paced song is filled with lyrics that glorify Balakrishna’s heroism to the hilt and even the visuals are shot lavishly to complement the lyrics. Overall, the song sets the expectations soaring and assures a mass treat in cinemas.

Balayya looks stylish and dashing in suits and his Van Dyke beard throughout Adugadugo Action Hero. The lyrical video also hints that Balayya plays a corporate czar in the movie. He flies in choppers, spends time playing golf, partying in nightclubs and even chitchatting with his mom, played by Jayasudha, in the song. Interestingly, the makers chose not to reveal much about Balayya’s angry cop’s avatar in the song.

Saicharan Bhaskaruni has sung the song which has been penned by Ramajogayya Shastry and composed by Chirantan Bhat. The film has Vedhika and Sonal Chauhan as the female leads. KS Ravikumar is the director and C Kalyan is the producer of Ruler. The film releases December 20.