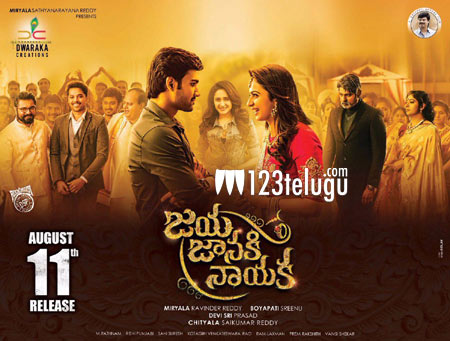 Boyapati’s Jaya Janaki Nayaka is getting ready for a massive release this Friday and the team is busy wrapping up the last minute formalities. The romantic entertainer has obtained an U/A from the censors and the run time has been locked to 149 minutes.

Even though the run time is a bit long, the makers say that the film will run on a racy note and provide good entertainment. Boyapati and DSP have wrapped up the re-recording of the film a short while ago and sources suggest that all the action sequences in the film will be a huge highlight as they have been shot on a lavish scale in a beach backdrop.

Jaya Janaki Nayaka is a very crucial film for Bellamkonda Srinivas as the success of the film will put his career on the right path. Rakul Preet Singh, Catherine Tresa, and Pragya Jaiswal play crucial roles in this film which is produced by Miryala Ravinder Reddy.