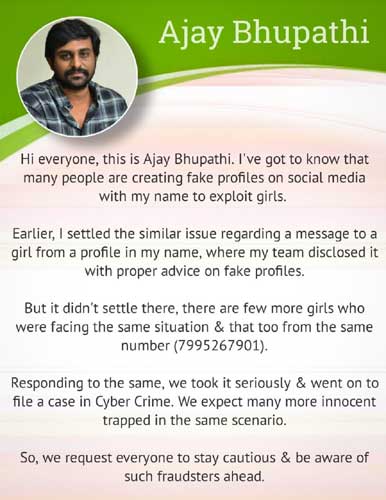 RX 100 director Ajay Bhupathi approached the Hyderabad Cyber Crime Police and filed a complaint against fraudsters who are exploiting innocent young girls by misusing his name. Ajay took to social media to caution aspiring actresses to ignore any casting calls or messages they have been getting under his name.

Ajay Bhupati said that the fraudsters are defaming his name and trapping women in the name of casting calls on WhatsApp, particularly from the number 7995267901. The director also said that he and his team had, in the past, acted immediately when they found similar casting calls using his name. But he finally approached the police since the fraudsters are in no mood to budge.