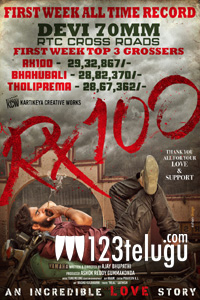 This is huge. Tollywood’s latest sensation, RX100, has set a new record at the Devi 70mm Theater at RTC ax Roads in Hyderabad. The film, which mostly ran to packed houses throughout has collected a whopping gross of Rs 29,32,867 in its opening week at Devi 70mm theater in Hyderabad.

What’s staggering about RX100’s box-office performance at Devi 70mm is that it has even beaten the previous record held by India’s biggest motion picture, Baahubali The Conclusion. In its first week, Baahubali 2 collected Rs 28,82,370 gross. RX100 also crossed Tholi Prema’s first week record (Rs 28,67,367) at Devi 70mm which has shocked many trade pundits as well.