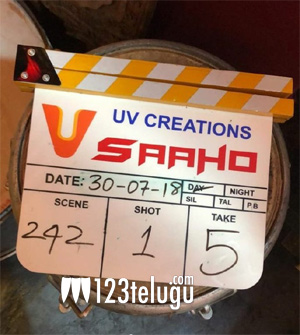 Some time back, we had revealed that the shooting of Saaho will be done in RFC, Hyderabad. The latest we hear is that the filming is on in a specially erected set in the famous studio.

Unit sources revealed that the shoot is on in full swing and director Sujeeth is wrapping up scenes in a fast manner. The makers are not leaving any stone unturned to make this film as big as Baahubali and want to finish this film as Prabhas needs to move on to his other project.

Depending on this schedule’s completion, the makers will decide an exact release date. Shraddha Kapoor plays the female lead in this film and she has joined the sets from today. UV Creations are the production house.