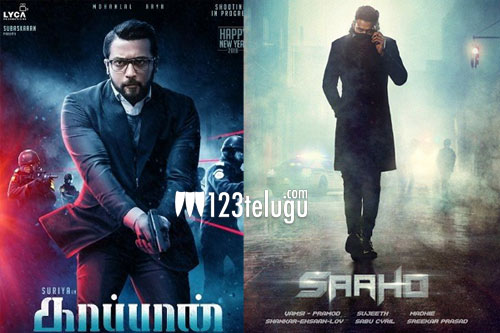 Following the historic success of the Baahubali franchise, hero Prabhas is all set to enthrall his fans across the world with Saaho. This high budget trilingual action adventurous thriller is slated to hit screens on August 15, as an Independence Day special treat.

And, if the latest buzz in Kollywood circles is anything to go by, Saaho may face a huge competition from Tamil star Suriya’s much-awaited action drama, Kaappaan. Like Saaho, even Kaappaan is rumored to be releasing on August 15. However, an official announcement regarding Kaappaan’s release date is awaited.

And if the Saaho-Kaappaan clash is inevitable, there’s no exaggeration in saying that the box-offices will be on fire over the Independence Day weekend. Stay tuned for more updates.