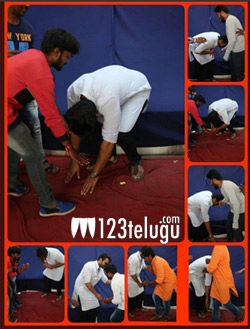 Young Mega hero Sai Dharam Tej is eagerly awaiting the release of his upcoming action entertainer, Inttelligent. The film is slated for release on February 9 and Sai met his fans recently as part of the film’s promotions.

During the meeting, a few overenthusiastic fans fell at Sai’s feet to show their admiration. Sai then shocked those fans by touching their feet in turn. The actor requested all the fans to never touch his feet. Incidentally, even Tamil star Suriya did the same during TSK’s promotional event in Tamil Nadu.