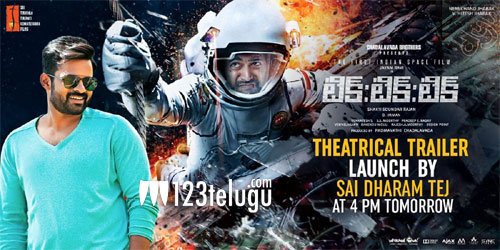 Recently, the Telugu teaser of India’s first space film Tik Tik Tik was released to a positive response from movie lovers. Tik Tik Tik is a Tamil film that has Jayam Ravi and Mental Madhilo girl Nivetha Pethuraj as the main leads.

The latest update is that young Mega hero Sai Dharam Tej will be unveiling the theatrical trailer of Tik Tik Tik’s Telugu version tomorrow evening at 4 pm. This high-budget sci-fi thriller is all about an Indian astronaut preventing a giant meteoroid from crashing into the Earth.

Tik Tik Tik’s Tamil version is slated for release on January 26, and going by the promotional activities, even the Telugu version may make it to the screens on the same day. The film is directed by Shakti Soundar Rajan. Padmavati Chadalavada is releasing the Telugu version.