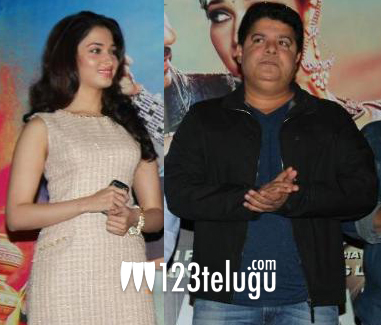 Ever since Sajid Khan announced that he was going to remake Himmatwala, there was a lot of curiosity over who was going to play the lead actress. Jeethendra and Sridevi had played the lead roles in the original film and in the remake Ajay Devgan was already confirmed to reprise Jeethendra’s role. Finally, the offer went to Tamannaah who had been quite busy with Telugu and Tamil projects for the past four years.

When Sajid Khan was asked, in a recent interview, why he chose Tamannaah, he revealed, “I didn’t want to cast any established Hindi film heroine opposite Ajay. My heroine had to be the biggest star down South. Someone told me about Tamannaah and when I saw her pictures I liked her look. When we approached her for the film, she was excited to join the team after coming to know that producer Vashu Bhagnani, Ajay Devgan and I were part of it. I didn’t watch a single film of hers before I signed her up for Himmatwala.”

In an earlier interview, Sajid Khan said he was extremely pleased with Tamannaah’s performance in the film and her dances in the songs will be a major highlight. However, she hasn’t been in the limelight as much as most other heroines are when their films are soon in offing. When Sajid Khan was asked the reason behind this, he claimed that it was a part of the strategy since he wanted her to be a big surprise when audience watch the film. Himmatwala is one of the most eagerly awaited films of 2013 and it’ll release on March 29.