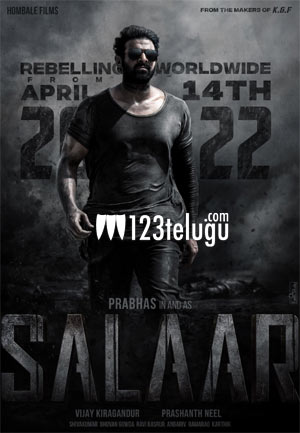 The wait is over finally. The makers of Prabhas’ highly-anticipated action entertainer, Salaar, announced this evening through a terrific poster that the film will be opening in cinemas worldwide on April 14 next year.

Since Salaar is scheduled for release during the summer holidays, the box-office will surely be set on fire with the massive hype and expectations around the project. Shruti Haasan plays Prabhas’ love interest in this Prashanth Neel directorial, which is rumoured to be the official remake of the director’s previous blockbuster, Ugramm.

Salaar is being produced by Vijay Kiragandur under Hombale Films banner. Ravi Basrur of KGF fame is composing the soundtrack.