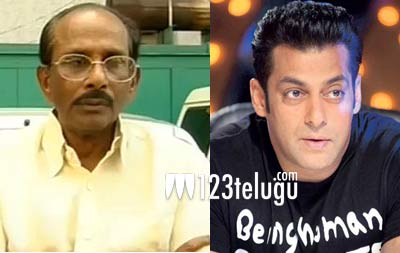 Bollywood hunk Salman Khan has always been very keen on South films. In fact, some of Salman’s biggest hits have their roots in South Indian films. Going by latest reports being seen in Bollywood media circles, Salman Khan seems to have approved the story of a well known Telugu writer.

The person is none other than Vijayendra Prasad, father of S.S.Rajamouli. Media sources say that Vijayendra Prasad has narrated a powerful action drama to Salman, which impressed the Bollywood actor. So far, no statement has come from Salman’s camp about this matter.

Telugu writer Kona Venkat has good relations with Salman Khan and Vijayendra Prasad might join that circle soon. Is this story a remake of a Telugu movie or is it a fresh new subject? Let us wait and see.