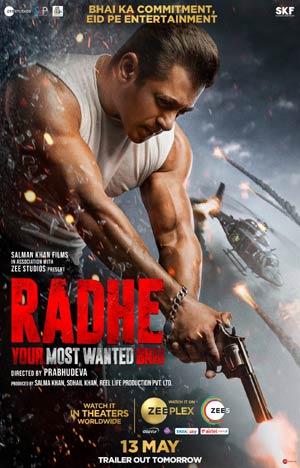 Bollywood superstar Salman Khan’s Radhe is one of the most eagerly awaited biggies in Bollywood this season. This Prabhu Deva directorial is slated to hit screens on May 13 to coincide with Bhai’s favourite festive season Eid.

However, Radhe’s makers have made a rare and bold decision. Apparently, Radhe will be having a simultaneous release in multiplexes and single screens across the country and also on Zee Plex and Zee5 OTT platforms on pay-per-view basis on the same day.

Radhe’s theatrical trailer will be out tomorrow (April 22). Salman, his brother Sohail Khan and brother-in-law Atul Agnihotri and Nikhil Namit are jointly bankrolling the film. Disha Patani is the film’s leading lady, while Jackie Shroff and Randeep Hooda play key roles in the movie.