Samajavaragamana’s Malayalam version out with a major change
Published on Nov 10, 2019 1:16 pm IST 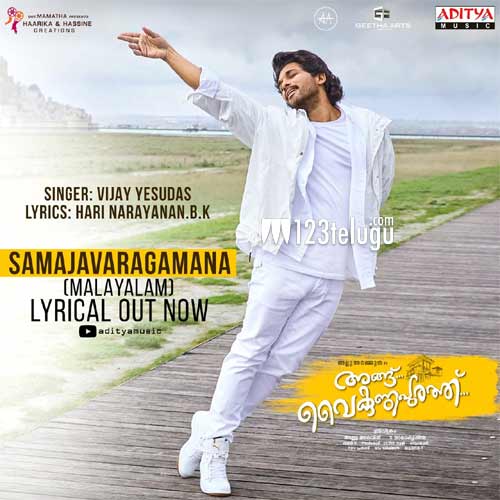 Samajavaragamana, the first single from Allu Arjun and Trivikram’s Sankranthi family entertainer, Ala Vaikunthapuramulo, became a massive chartbuster and amassed over 76 million views on YouTube so far. This morning, the makers unveiled the song’s Malayalam version, but with a major change.

In Samajavaragamana’s Malayalam song, young singing sensation Sid Sriram has been replaced by popular Mollywood playback singer Vijay Yesudas. However, the response for the just released song is very much similar to that of the Telugu version. Bunny’s Kerala fans are giving a huge thumbs up for the song, and this will raise expectations on the film’s Malayalam version.

Ala Vaikunthapuramulo is simultaneously releasing in Malayalam as Ala Vaikuntapurathu. The film has Pooja Hegde, Nivetha Pethuraj, Tabu, Navdeep and Sushanth in prominent roles. Thaman is the music composer. The film hits screens on January 12.