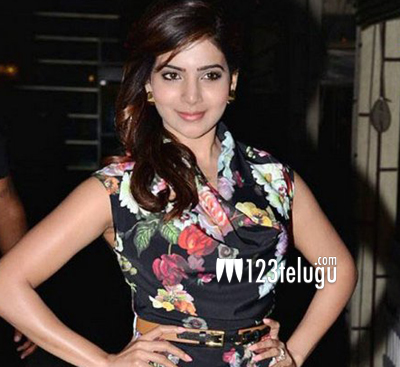 Samantha is a busy bee these days. Recently, she went on a vacation to London and soon after that she shot for a commercial for Paragon footwear in Chennai. Few days ago, she flew to Dubai to join the film unit of her upcoming film in V V Vinayak’s director.

Now, she has returned to Hyderabad and she is going to shoot for her next Tamil film in Murugadoss’ direction. Samantha is playing Vijay’s romantic interest in this action entertainer. The first schedule of the film was shot in Kolkata and after that Samantha had shot for few days for this film in Chennai. Vijay and Murugadoss had been shooting this untitled for the past few days in Hyderabad.

Apart from this film, Samantha also has Suriya’s Anjaan and NTR’s Rabhasa which are in various stages of production. Meanwhile, she will soon be seen in Manam which is slated for release later this summer.