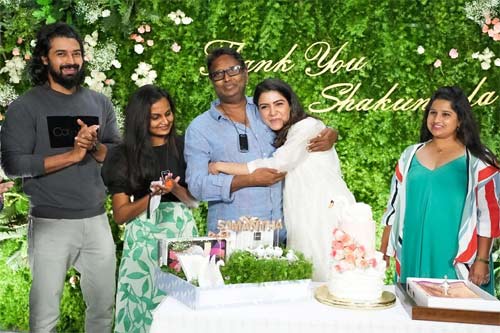 Star heroine Samantha has wrapped up shooting for her part in Gunasekhar’s pan-India mythological magnum opus, Shaakuntalam. The actress took to Twitter and shared a few pictures with the film’s core team and posted a series of emotional tweets.

Sam said that Shaakuntalam will stay with her for the rest of her life. She added that, as a little girl, she believed in fairy tales and went on to call Gunasekhar her “fairy godfather” for making her dream a reality.

“When he narrated this film to me I was immediately transported to a most beautiful world. The world of Shaakuntalam..a world like no other.
But I was nervous and scared. Was it possible for us to create such beauty on celluloid?,” Sam tweeted.

The actress concluded saying that she has an immense feeling of love and gratitude to the “absolutely incredible human, Gunasekhar, for creating a world that has exceeded all her expectations. “The inner child in me is dancing with joy. Thankyou,” tweeted Sam.

And it’s a wrap on Shaakuntalam !!
This film will stay with me for the rest of my life .As a little girl I believed in fairy tales .. not much has changed .I still do ❤️….and @Gunasekhar1 sir my fairy godfather ☺️ for making my dream a reality . pic.twitter.com/yYootg3DnM