Samantha’s Look From Mahanati Gets Terrific Response
Published on Apr 7, 2018 12:05 am IST 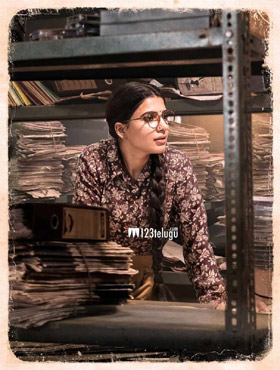 Samantha is on cloud nine following the overwhelming response that she received for her performance in Rangasthalam. Now, she is gearing up to enthrall the audience once again with her role in Mahanati, biopic of Savitri. Directed by Nag Ashwin, the film has Keerthy Suresh playing the role along with a host of other actors.

The actress will be seen as a journalist in the film and it is from her perspective that the story is narrated. The first look of her character, Madhuravani, was unveiled on social media earlier today and it received a terrific response from the audience.

“Really happy to be part of such a wonderful film. I hope you love Madhuravani as much as I loved being her,” she said. Mahanati will hit the screens on May 9.

Really happy to be a part of such a wonderful film . I hope you love #Madhuravani as much as I loved being her ❤️❤️❤️ #Mahanati @VyjayanthiFilms @nagashwin7 #MahanationMay9th pic.twitter.com/zrCim93nPW