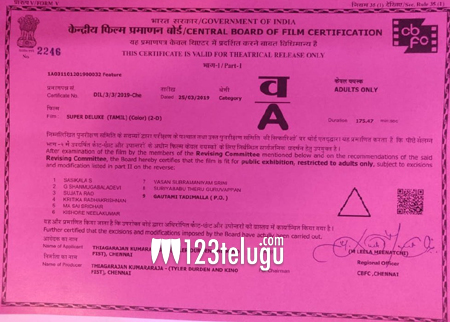 Star heroine Samantha’s Tamil crime drama, Super Deluxe, is all set to hit the screens on March 29th. The film also stars Vijay Sethupathi and he will be seen portraying the role of a transgender.

Now, the latest news is that Super Deluxe has wrapped up its censor formalities and received an A certificate. The film’s runtime is 2 hours 55 minutes. Super Deluxe also has Malayalam actor Fahadh Faasil and Ramya Krishna in key roles.

Thiagarajan Kumararaja is the film’s director. The film may be dubbed in Telugu later this year.