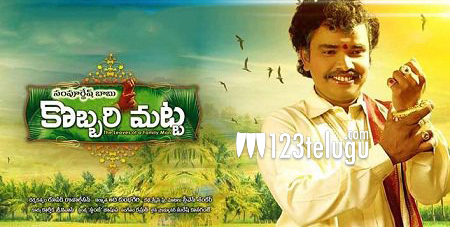 The team behind Hrudaya Kaleyam is finally ready with their second film, Kobbari Matta, which is gearing up for release in November. Directed by Ronald Rupakson, the film has Sampoornesh Babu in triple roles. Sai Rajesh, also known as Steven Shankar, has produced the film apart from writing the script.

With less than a month to go before release, Sai Rajesh has revealed that he was shocked with how much Sampoornesh Babu had evolved as an actor compared to Hrudaya Kaleyam. Apparently, the team wanted a create a big impact at the interval point, and when Sampoornesh was given a lengthy monologue, he straight away said that he can’t do it. Few days later, he shocked Sai Rajesh by reciting the entire dialogue, which is more than three minutes long, without taking a break. Now, the team is confident that this breathless dialogue will make a huge impact.

The film also has Shakeela in an important role. Kobbari Matta is slated for release on November 14.