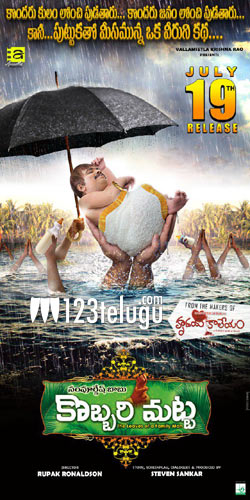 Finally, after being delayed for more than 2 years, actor Sampoornesh Babu’s much-awaited comedy entertainer, Kobbari Matta, has sealed its release date today. The film’s makers released a hilarious new poster this morning, announcing that Kobbari Matta will be hitting screens on July 19.

Like Sampoo’s blockbuster debut film, Hrudaya Kaleyam, Kobbari Matta too is a spoof drama. The film is directed by Rupak Ronaldson and written and produced by Hrudaya Kaleyam director Steven Shankar. Ishika Singh is the leading lady in the movie. We will have to wait to see if Sampoo can again recreate the magic he had created on his debut.