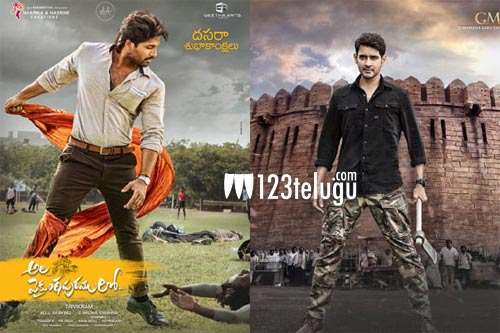 Not only in the twin Telugu states, but Mahesh Babu’s Sarileru Neekevvaru and Allu Arjun’s Ala Vaikunthapurramuloo are performing quite well at the cinemas across several key areas in India.

Mahesh Babu’s popularity in Chennai and Tamil Nadu needs no introduction. He is the most popular Tollywood star in the Tamizh land. Reiterating this fact, Sarileru Neekevvaru collected a decent gross of Rs 57 lakhs since its release and until the 15th of January.

On the other hand, Ala Vaikunthapurramuloo too is having a pretty decent run at the Chennai box-office. The film has so far collected Rs 33 lakh gross in 4 days since its release. It’s worth mentioning that both the movies are facing a tough competition from Rajinikanth’s Darbar and Dhanush’s just released commercial potboiler, Pattas. Stay tuned for more updates.