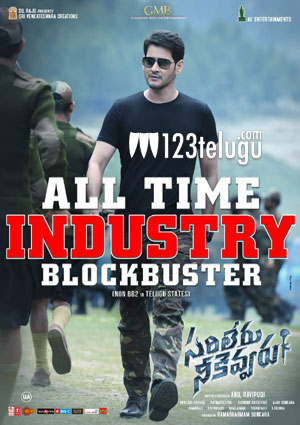 Mahesh Babu’s latest film, Sarileru Neekevvaru, released for the Sankranthi festive season and ended up as a huge blockbuster. The film has already found its place in the list of all-time top 5 grossers in Tollywood.

And this evening, the film’s makers unveiled a couple of new posters which claimed that Sarileru Neekevvaru is the all-time non-Baahubali 2 industry hit in the twin Telugu states. While the posters are sure to raise several debates on the internet, Mahesh fans are overjoyed with the grand success of this Anil Ravipudi directorial.

Sarileru Neekevvaru has Rashmika Mandanna and Vijayashanti in key roles. Anil Sunkara has produced the movie, with Dil Raju and Mahesh presenting it.