Sarileru Neekevvaru’s pre-release event to be held on a massive scale
Published on Dec 15, 2019 2:59 pm IST 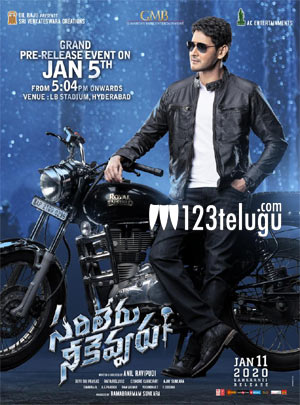 The makers of Superstar Mahesh Babu’s Sarileru Neekevvaru are leaving no stone unturned to promote the film. Each song and poster, apart from the teaser, released so far has gone viral and there is a lot of excitement and euphoria surrounding the film.

Meanwhile, the team has confirmed that the grand pre-release event of the film will be held on a massive scale at LB Stadium, Hyderabad on January 5. There’s a lot of anticipation about the event and also to see who is going to be the chief guest on the big day.

Mahesh Babu will be seen as an army officer who goes to Kurnool on a mission. Vijayashanti, Rashmika, Prakash Raj will be seen in key roles in this film, directed by Anil Ravipudi. DSP has scored the music, and Rathnavelu is the cinematographer.