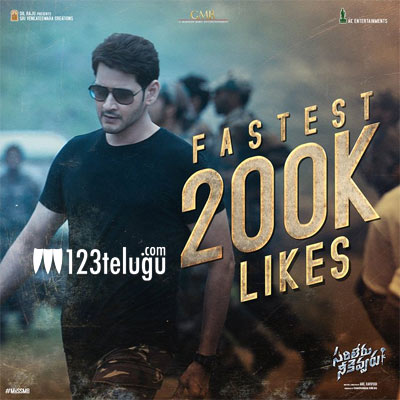 The highly-anticipated teaser for Mahesh Babu’s Sankranthi entertainer, Sarileru Neekevvaru, was unveiled this evening to a unanimous positive response from all quarters. Mahesh looked like a million bucks in his Army Major’s avatar and his massy dialogues in the Kurnool episode are enthralling fans.

Thanks to the ultra positive response, Sarileru Neekevvaru’s teaser is already smashing all the existing YouTube records. After clocking a record 1 million views and 100K likes within just 9 minutes of its release, the teaser has now received over 225K likes in less than an hour, becoming the fastest Telugu film teaser to pull off this feat.

Needless to say, fans are elated seeing Mahesh in an ultra mass avatar after a long time, and director Anil Ravipudi has taken the expectations on the film to the next level with the action-packed teaser. Also starring Rashmika Mandanna, Vijayashanti and Prakash Raj in key roles, Sarileru Neekevvaru is hitting screens on January 11. Anil Sunkara is the producer and Dil Raju and Mahesh are jointly presenting the film. DSP is the music composer.