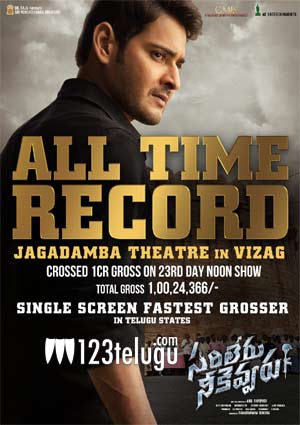 Released on January 11 as a Sankranthi treat, Mahesh Babu’s Sarileru Neekevvaru went on to become a huge blockbuster. The film is into its 4th week, but it continues to set unprecedented records.

In a latest never before feat, Sarileru Neekevvaru has become the first ever movie to collect Rs 1 crore gross at Vizag’s iconic Jagadamba Theater. Until the noon show on its 23rd day, Sarileru has collected a total gross of Rs 1,00,24,366 at Jagadamba Theater and became the fastest grossing film at any single screen in the twin Telugu states.