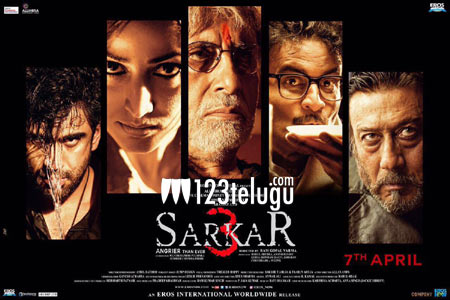 RGV’s upcoming Hindi film Sarkar 3, which is going to release in April this year, marks the return of Amitabh Bachchan in an iconic role – Subhash Nagre, popularly known as Sarkar, for the third time. The first part which released in 2005 was a massive hit and RGV-Amitabh teamed up once again for the sequel Sarkar Raj in 2008.

Now, with Sarkar 3, RGV has expanded the franchise into a different territory and new actors. Although the previous film had the likes of Abhishekh Bachchan and Aishwarya Rai, Sarkar 3 will have actors like Amit Sadh, Yami Gautam and Manoj Bajpayee, alongside Amitabh Bachchan.

The film’s first trailer was unveiled a little while ago and going by the tone, it’s evident that RGV has turned Amitabh Bachchan into an angry young man once again. The trailer is receiving rave response on social media and it looks like RGV is set to hit the bulls eye at the box office with this Hindi film which will release on April 7.