Sarkaru Vaari Paata rampage begins with US premieres
Published on May 12, 2022 9:43 am IST 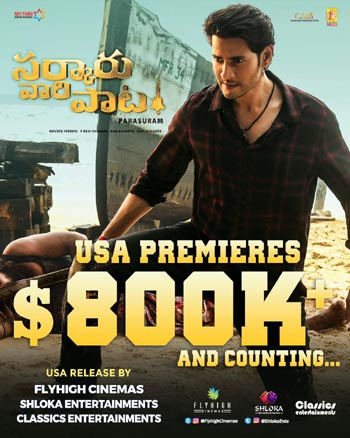 Tollywood star hero Mahesh Babu-starrer Sarakaru Vaari Paata has been released today in theaters across the world. Helmed by the director Parasuram Petla, the movie has Keerthy Suresh as the lead actress.

The movie has been receiving positive reviews from everywhere and in the meantime, the movie has already grossed more than $800K just with premieres in the USA. This is humongous for any movie released on Wednesday overseas.

Bankrolled by Mythri Movie Makers, 14 Reels Plus and GMB Entertainment, the movie has Subbaraju, Samuthirakani, Naga Babu, Nadiya, Vennela Kishore and others in key roles. The movie’s music is composed by Thaman S.