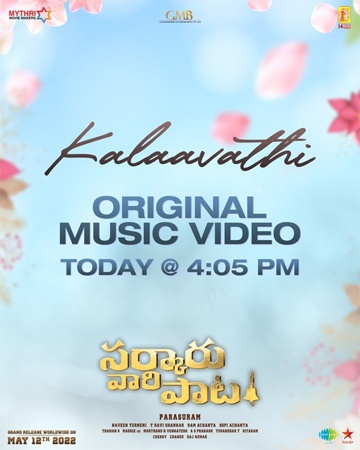 Mahesh Babu’s Sarkaru Vaari Paata is undoubtedly one of the biggies audiences are eagerly waiting to watch on the big screens. For the past few days, the makers have been hinting at the release of the first single, Kalaavathi, a melodious track composed by Thaman S.

As the rough version of the track was leaked yesterday, the makers have decided to release the song today at 04:05 PM. Sung by Sid Sriram and lyrics penned by Ananta Sriram, the song’s promo has been receiving good responses from the audiences.

Keerthy Suresh is the leading lady in this action entertainer, directed by Parasuram Petla. Produced by GMB Entertainment, Mythri Movie Makers and 14 Reels Plus, the movie is up for a grand release on May 12, 2022.