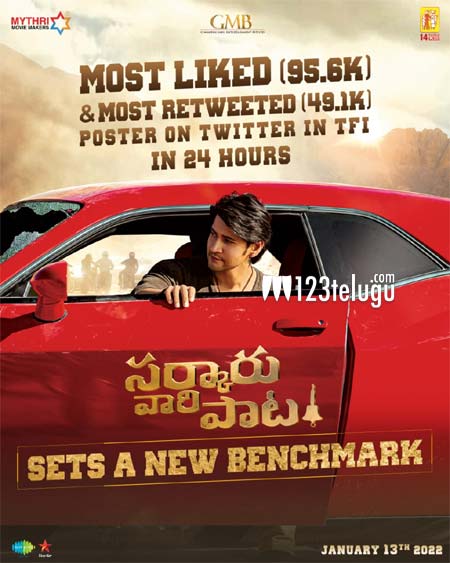 Yesterday evening, star hero Mahesh Babu took to his Twitter page and unveiled the ‘First Notice’ poster for his highly-anticipated action entertainer, Sarkaru Vaari Paata. Mahesh’s stylish new look has been a hot topic of discussion ever since the poster launch.

Thanks to sensational response, Sarkaru Vaari Paata’s First Notice poster has set a new record in Tollywood. The poster has emerged as the Most Liked (95.6K) and Most Retweeted poster (49.1K RTs) within 24 hours. This is just the beginning and the film’s promotional material will break several existing records in the film’s run-up to its release on January 13, 2022 as a Sankranthi festive treat.

Also starring Keerthy Suresh, Sarkaru Vaari Paata is being directed by Parasuram and produced under Mythri Movie Makers banner in association with Mahesh’s GMB Entertainments and 14 Reels Plus banners. Thaman is composing the soundtrack.