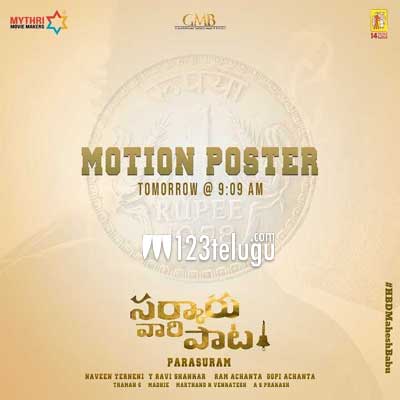 Here comes the much-awaited update on Mahesh Babu’s Sarkaru Vaari Paata. The makers of this high budget entertainer have just revealed that the film’s electrifying motion poster will be unveiled tomorrow at 9:09 am as a special treat for fans on Mahesh’s birthday.

Even though there have been a lot of speculations regarding Sarkaru Vaari Paata’s story and Mahesh’s role in it, the makers are still tight-lipped and fans will have to wait until the film’s trailer to get an idea. The film will feature national award-winning actress Keerthy Suresh who’s paired with Mahesh for the first time.

Parasuram will be directing Sarkaru Vaari Paata and Mythri Movie Makers banner will be bankrolling the project in Mahesh Babu’s and 14 Reels Plus presentation. Hotshot music composer Thaman is scoring the film’s soundtrack.