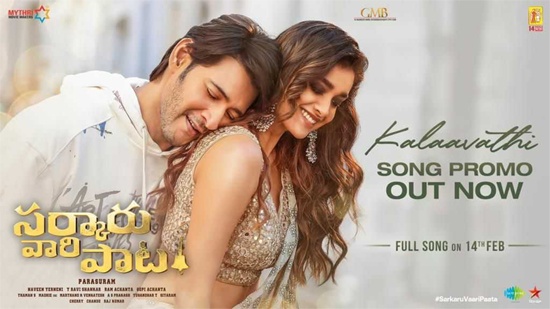 There’s huge hype around the first single of superstar Mahesh Babu’s highly anticipated film Sarkaru Vaari Paata, ever since music director S Thaman announced the songs of the film, particularly, the first song Kalaavathi will be a treat for music lovers. Furthermore, the team is teasing by coming up with updates on the song.

After treating one and all with a romantic poster, the team has arrived with the promo of the song Kalaavathi. The short video transports us to another world with its fascinating composition, soulful vocals, and appealing visuals. It’s an eye feast to see the sparkling chemistry of Mahesh Babu and Keerthy Suresh. While Mahesh Babu looks super cool, Keerthy Suresh looks gorgeous in the song.

Parasuram is directing the film which is jointly produced by Naveen Yerneni, Y. Ravi Shankar, Ram Achanta, and Gopichand Achanta under Mythri Movie Makers, GMB Entertainment, and 14 Reels Plus banners.