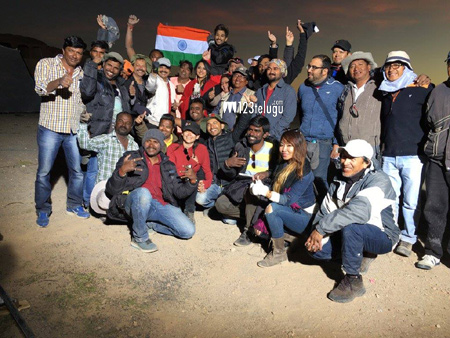 There have been humongous expectations on the Bunny-Boyapati combo’s mass action entertainer, Sarrainodu. The film’s unit was shooting the romantic duet ‘Thelusa Thelusa’ on Bunny and Rakul in the world famous Salar de Uyuni in the exotic Latin American country of Bolivia.

Yesterday, the unit wrapped up the song’s shooting and even posted an on-location still in which Bunny was seen holding the tricolor. With this, the film’s shooting has almost been wrapped up apart from a short patchwork. Sarrainodu’s massy teaser has been the talk of the town ever since it was released a week ago.

Produced by Allu Arvind, Sarrainodu also stars Aadhi Pinisetty and the film will hit the screens in April.