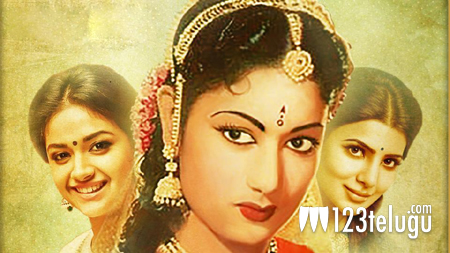 ‘Mahanati’ Savitri is one of the most popular actresses of all time and her upcoming biopic ‘Mahanati’, to be directed by Nag Ashwin, has raised a lot of curiosity among moviegoers ever since it was announced. While Samantha will be seen as a journalist, Keerthy Suresh will be essaying the role of Savitri herself.

Interestingly, in a recent interview, Savitri’s daughter Vijaya Chamundeswari revealed quite a few interesting facts about her mother. She used to make it a point to spend time with her kids and play with them, even though she was quite busy with her film shoots. “Contrary to what people think, we lived a very comfortable life even after my mother died. She had made quite a lot of money , even though she lost a lot,” Vijaya said, adding, “She wasn’t clever enough to deal with her problems in the marital life. Since she didn’t have proper guidance, she became an alcoholic.”

Apparently, she was quite pleased when Nag Ashwin approached her to seek permission for the biopic and revealed that she found him very genuine and modest. But she had two conditions for Nag Ashwin. “I wanted to read the script before the shoot began and I was very particular that they show her rise to stardom,” Vijaya said.