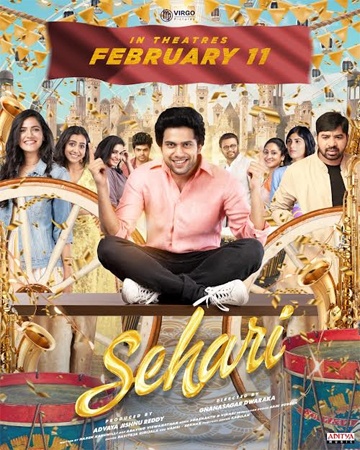 Harsh Kanumilli and Simran Choudary starrer upcoming film Sehari, which has got good response from all the corners for songs and teaser, is all set to entertain the audiences in theaters.

Today, the makers have officially announced that the rom-com is ready to release in theaters on February 11, 2022. The promotions will begin from next week, as the release date is not far away.

Directed by Gnanasagar Dwaraka, the movie has the veteran music director in a crucial role. Abhinav Gomatam, Praneeth Reddy, Anisha Alla, Akshitha Harish and others are also playing prominent roles in Sehari.

Bankrolled by Advaya Jishnu Reddy under Virgo Pictures. Prashanth R Vihari has rendered soundtracks for the movie, while Aravind Vishwanath has cranked the camera. Ravi Teja Girijala is the editor.