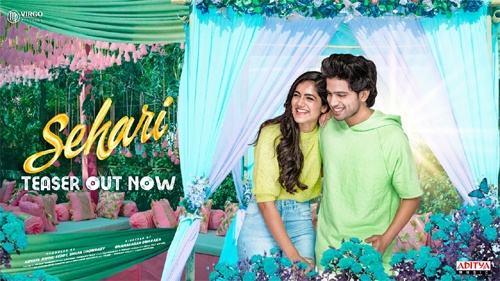 The teaser for young actors Harsh Kanumilli and Simran Choudhary’s upcoming romantic entertainer, Sehari, has been launched this morning. The teaser is colourful and promises a fun and breezy ride in cinemas this summer. The teaser starts off with Balakrishna, during Sehari’s first look launch event, calling hero Harsh a ‘Virgin Star’ who is just debuting in the world of movies.

Harsh plays Varun, who is desperately trying to find a bride after breaking up with his girlfriend. He soon falls in love with his fiancee’s elder sister, played by Simran Choudhary. Debutant Gangasagar Dwaraka has directed Sehari and Prashanth R Vihari has scored the soundtrack.

Advaya Jishnu Reddy and Shilpa Chowdary are producing Sehari under Virgo Pictures banner. The film’s release date will be out soon.