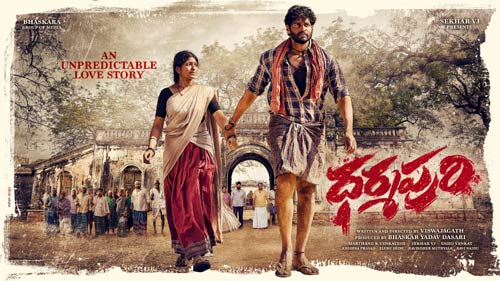 Noted Tollywood choreographer Sekhar Master is turning presenter for the upcoming romantic drama, Dharmapuri. The film’s first look poster has been unveiled this morning. Dharmapuri is the first Telugu film set in Dharmapuri, Jagityal district in Telangana. The film features Gagaan Vihari and Aparna Devi as the main leads.

Dharmapuri is touted to be a realistic love story and it is set in the backdrop of 90s Dharmapuri. The Dora culture and oppression that were prevalent in those times will be prominently showcased in the film. Dharmapuri is directed by Viswajagath and produced by Bhaskar Yadav Dasari. The film’s release date will be announced soon.