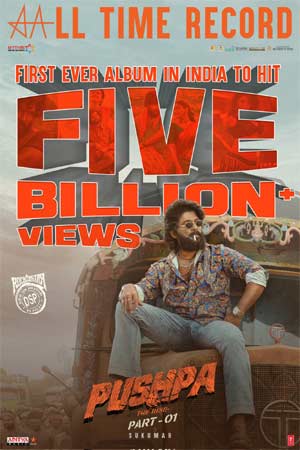 Tollywood audiences are eagerly waiting for the mega update on Pushpa 2. The most successful combo Allu Arjun and Sukumar will soon commence the shoot of the movie. In the meantime, Pushpa has created a unique record.

The music album of Pushpa: The Rise, composed by the Rock Star Devi Sri Prasad has become the first ever Indian music album that crossed 5 billion views including all the languages. This is phenomenal and an unbeatable record by any Indian movie in the near future.

Rashmika Mandanna played the lady love of the Icon Star in the movie. Sunil, Anasuya, Fahadh Faasil and others played crucial roles in Pushpa. Keep watching this space to know more interesting updates about movies.

The Biggest Ever Feat In Indian Cinema ❤️‍🔥