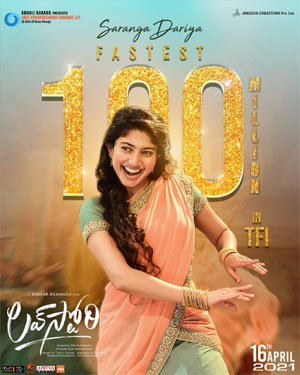 Sai Pallavi’s Saranga Dariya is a song that has created a solid hype ever since it was released. The song is sung by Mangli and has become a chartbuster and has crossed the 100 million mark in no time.

The song has clocked 100 million hits on Youtube and in this process, has become the fastest song in Telugu to achieve this feat.

This song is from Shekhar Kammula’s Love Story which also has Chay Akkineni as the main lead. The songs are composed by Pawna CH and they have given the film a good buzz.

Love Story will release on the 16th of this month. Chay Akkineni plays the main lead.