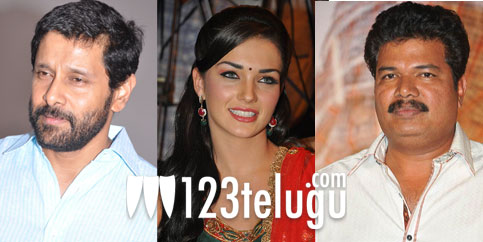 Shankar’s upcoming film Manoharudu is going to be a visual feast. The film stars Vikram and Amy Jackson in lead roles and Aascar Ravichandran is producing this big budget film. After a long schedule in Chennai, the film unit has been travelling all across China to shoot the film in some never before seen locations. “Reached our new China spot, it’s where Crouching Tiger Hidden Dragon was filmed! Hope me Vikram & Moi will be flying about the place too :D,” Amy Jackson revealed. Crouching Tiger, Hidden Dragon, a Chinese film directed by Ang Lee, was shot in several breathtaking locations in China and Shankar seems to be capturing few such places for his film. In the past, Shankar had shot his film Jeans at Great Wall of China and Robo was shot in Brazil and Peru. Now, he’s exploring stunning locales in the interior regions in China. Manoharudu is being touted as a romantic thriller. A R Rahman is composing the music and PC Sreeram is the cinematographer. An internationally renowned team of costume designers, special effects supervisors and action choreographers are working on this film. Manoharudu is likely to release in 2013.