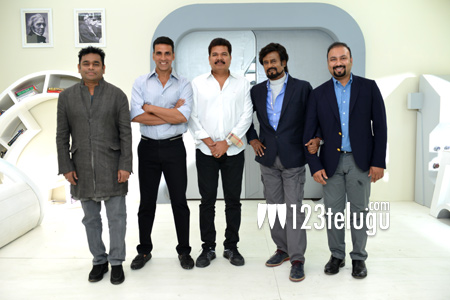 Robo, which had the blockbuster combination of Superstar Rajnikanth and director Shankar, turned out to be a worldwide success. Now, shooting for the sequel was recently kickstarted and it is progressing at a brisk pace. Shankar is planning to take the sequel to the next level, since the first part already set the bar up high. Robo 2 will be the one of the biggest budget flicks in Indian Cinema and expectations are extremely high. Recently, Shankar surprised everyone by roping in Bollywood star Akshay Kumar as the antagonist.

The title of the movie is unique all by itself. The movie was christened as Robo 2.0 in all three languages rather then differentiate the name as per the language. Apparently in Tamil Nadu, if the title of the movie is in Tamil, there will be a reduction in tax. This is the reason the first part was titled Enthiran in Tamil rather than Robo like the rest of the languages. This time around, Shankar has decided to finalise the name Robo 2.0 for all three languages. The film also stars Amy Jackson as the lead actress while A. R. Rahman will compose the tunes. The movie is being produced by Lyca Productions.