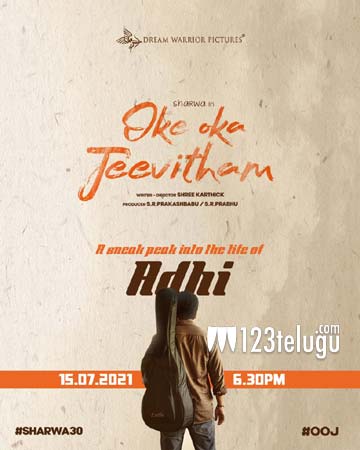 It is known that Tollywood stars Sharwanand and Ritu Varma will next be seen in a Telugu-Tamil bilingual romantic family entertainer, titled Oke Oka Jeevitham. Sharwa plays a musician in the movie, which also has an emotional mother-son track.

This evening, OOJ’s makers released a special poster to announce that a sneak peak into the life of Sharwa as Adhi will be released tomorrow (July 15) at 6.30 PM. The film also features yesteryear heroine Amala Akkineni in a mother’s role. OOJ marks Amala’s comeback in Kollywood after nearly 3 decades.