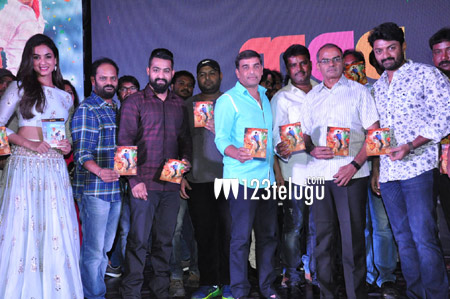 The audio album of Nandamuri Kalyanram’s soon to be released mass entertainer, Sher, was released by Young Tiger NTR in Hyderabad last night. The audio album, composed by SS Thaman, already became a huge success among the Nandamuri fans and it created a positive buzz for the film.

Speaking on the occasion, Kalyanram revealed the reason why he teamed up with ​the film’s director Mallikharjun for the third time. The Nandamuri hero said that he believes in Malli’s abilities as a director and expressed confidence over the film’s success.

NTR, who was the chief guest at the audio launch, said that Thaman is a creative music composer. NTR also wished that his brother, Kalyanram, should always be happy and smiling in his life. The Young Tiger also wished the entire team a grand success. Produced by Komara Venkatesh, Sher has Sonal Chauhan in the female lead. The film will hit the screens in November.