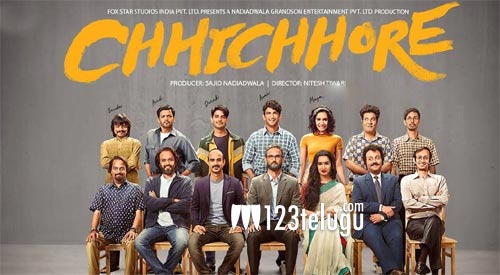 Bollywood actress Shraddha Kapoor, who recently delivered a hit with the Hindi version of Prabhas’ Saaho, has now scored yet another hit, this time with young Bollywood hero Sushant Singh Rajput. Shraddha’s latest Hindi flick, Chhichhore, has been declared a hit by trade analysts.

On Monday, Chhichhore utilized the Muharram holiday to the fullest and collected Rs 11 crore nett across India. The film’s 5-day all-India nett is a decent Rs 56 crore. The film is all set to enter the Rs 100 crore club in its full run, and the Tuesday performance will reveal its actual box-office potential.

Chhichhore also features Agent Sai Srinivasa Athreya hero Naveen Polishetty in a crucial role. The film marks Naveen’s debut in Bollywood, and he is bound to get more offers, thanks to the film’s success. Dangal director Nitesh Tiwari has helmed Chhichhore.