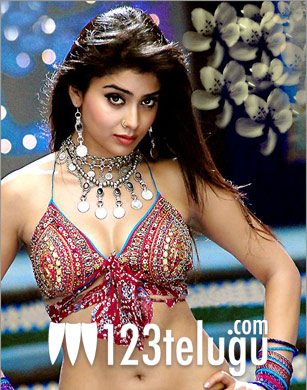 Shriya Saran is no longer the glamour doll, a term which became synomynous with her career in Telugu. From the days of Chennakesava Reddy to her recent cameos in songs, she has appeared in numerous roles where she had flaunted her curves and danced away to glory. However, in the past couple of years, there seems to be major shift in the kind of roles she has been accepting.

For instance, in Sekhar Kammula’s Life is Beautiful, she played a rich girl who develops a soft corner for a middle class boy who lives in the same neighbourhood. In Roopa Iyer’s upcoming film Chandra, she’ll be seen as a last generation princess who has to come to terms with the change in her life and in Janardhan Maharshi’s Pavitra she’s playing a bold role who fights against injustice and becomes a politician in the end.

The latest news is that she has been roped in to play one of the lead roles in Vikram Kumar’s upcoming film titled Manam. She’ll be paired opposite Nagarjuna in this multi-starrer which also stars ANR and Naga Chaitanya. Shriya Saran and Nagarjuna have earlier teamed up for films like Santosham, Nenunnanu and Boss : I Love You. Since it’s a family drama, Shriya Saran will once again essay a different role, unlike the glamorous roles she had essayed in the past. Having enjoyed stardom at the peak of her career in mid 2000s, it looks like Shriya has found a new comfort zone by taking up such varied roles and experimenting with her onscreen image. This really is a welcome change.