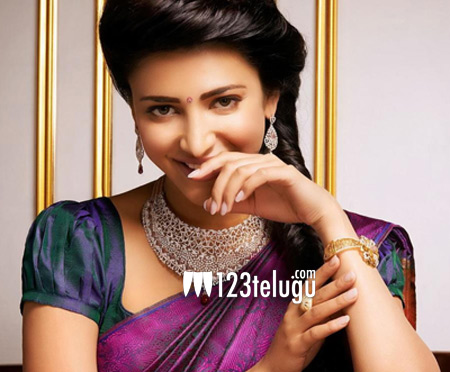 Not many years back, Shruthi Haasan was considered a flop actress and things were definitely not going the way she wanted to. Pawan Kalyan’s Gabbar Singh changed her life upside down.

Hailing from a prestigious film family, and being the daughter of legendary Kamal Haasan, Shruthi had a easy launch in films. She made her debut with the Hindi film Luck, which did not bring her much luck at the box office. Then she ventured down south, and made her Telugu debut with ‘Anaganaga O Dheeru’. Even this film bited the dust and Shruthi was considered unlucky and written off completely.

Loosing no hope, she kept her calm, and continued doing her best. Being a trained musician she composed music for her dad’s film, and even did playback for Tamil movies. All of this brought Shruthi good recognition, but not the stardom she expected. Even her second Telugu film, ‘O My Friend’ brought her average returns but did not hit the bulls eye. Same was the case with her Tamil flick opposite superstar Suriya.

Things changed drastically in 2012, when she was finalized for Gabbar Singh. There was a huge hue and cry in film circles as to why a unlucky actress was signed opposite Pawan Kalyan in such a huge project. But the makers insisted with her, and went ahead with the film. Gabbar Singh released and became one of the biggest hits in Tollywood.

Post the success of Gabbar Singh, there was no looking back for Shruthi, as became an overnight sensation and got huge offers. Moving ahead, her next film was Balupu with Ravi Teja. Till that film happened, even Ravi Teja was also not seeing much success at the box office. Balupu released and gave both Ravi Teja and Shruthi Haasan a new lease of life.

Post Balupu, Shruthi was considered a golden girl in Tollywood. Things took such a drastic turn that every other movie that Shruti acted, went on to become a blockbuster. She gave massive hits like Yevadu and Race Gurram with Mega family heroes. Even her Hindi films like D Day, Ramaiyya Vastavaiyya went to become huge hits.

From a not so happening actress, Shruthi became one of the highest paid actress in India. Films, Awards and brand endorsements, Shurhi was all over the place and has become a true inspiration for everyone. She is currently in the best phase of her career and is dominating both the Hindi and Telugu film industries.

Come 2015, Shruthi has some exciting and huge Hindi projects lined up, and is set to hit Bollywood with a bang and make everyone sit right up and notice her talent.