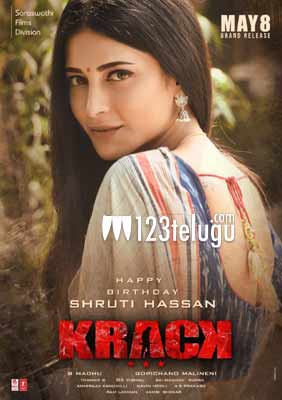 It’s been nearly 3 years since heroine Shruti Haasan was last seen in a Telugu film. Her last Telugu release was Pawan Kalyan’s Katamarayudu, which released in March, 2017. Now, after 3 long years, a first look poster featuring Shruti Haasan is out and it’s leaving her fans thrilled.

Shruti celebrates her birthday today. On this occasion, the makers of her comeback Telugu movie, the Ravi Teja-starrer Krack, released her first look from the movie. In the poster, Shruti looked elegant as ever in a traditional costume. Details about her role in the movie have been kept under the wraps.

Krack is being directed by Gopichand Malineni and produced by Tagore Madhu. Thaman is scoring the soundtrack. The film is scheduled for a May 8th release.