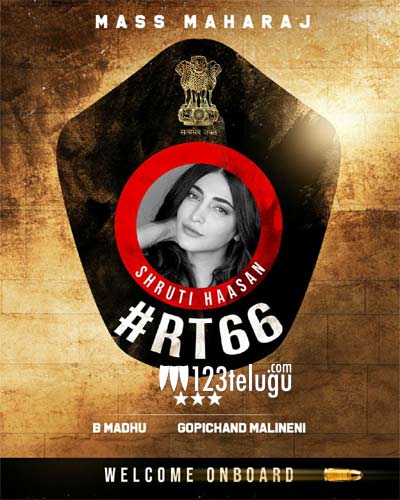 Recently, ending several months long speculations, the makers of Ravi Teja’s 66th film had made an official announcement. This as-yet-untitled cop drama will be directed by Gopichand Malineni and produced by Tagore Madhu.

Now, confirming the speculations, the makers have just announced that popular heroine Shruti Haasan has been roped in to play the female lead in the movie. In the past, Ravi Teja and Shruti had shared screen space in Gopichand Malineni’s 2013 hit film, Balupu. Ravi Teja’s 66th film also marks Shruti’s comeback to Tollywood after the 2017 film, Katamarayudu.